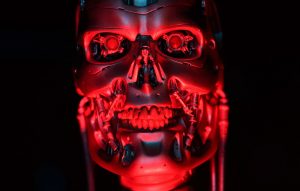 The latest film in the franchise is out in October Terminator James Cameron has announced the new working title for Terminator 6. The film’s executive producer and the director of the first two movies in the franchise revealed the title in a new interview. Speaking to Yahoo, Cameron said the film was currently called Terminator: Dark Fate. “That’s our working title right now,” he said. Discussing the work of […] The post James Cameron reveals the new working title for ‘Terminator 6’ appeared first on NME.
Full Article at NME