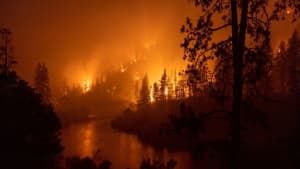 The intense McKinney fire in Northern California is producing its own weather, generating four thunder and lightning storms just in its first 24 hours. The fire broke out in the Klamath National Forest on Friday, and since then, has burned more than 55,000 acres. It is fueled by parched vegetation, high temperatures, and dry conditions, and the fire is burning so hot that its smoke has penetrated the stratosphere, multiple times, and formed a pyrocumulonimbus cloud -- dubbed by NASA as the "fire-breathing dragon of clouds." There was then rain, wind, thunder, and lightning, making this a "classic example of a wildfire producing its own...
Full Article at The Week