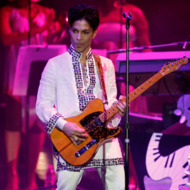 Back in 2008, Prince headlined Coachella and unexpectedly covered Radiohead's "Creep." Unfortunately for fans who didn't trek it to Indio that year, that performance ended up being one of the decade's biggest you-had-to-be-there moments, thanks to Prince's famously sporadic anti-internet stance: He yanked all videos from the set from YouTube, ... More
Full Article at New York Mag