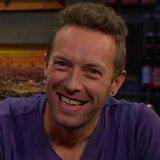 Coldplay stopped by The Late Late Show With James Corden on Monday night, giving an interview as well as a sensational performance of "Head Full of Dreams." When the members sat down with James to discuss the album, frontman Chris Martin provided a step-by-step breakdown of what it was like to recruit Beyoncé for her vocal talents. The hilarious "process" includes waiting in a tiny room for a week, playing tennis with Jay Z, and coming face to face with the other members of Destiny's Child. Watch the full video above, listen to the Coldplay song that features Bey, and then watch the band's interview with Ellen DeGeneres last week.
Full Article at PopSugar