Jan. 6 committee uses new footage to link Trump with violence at the Capitol 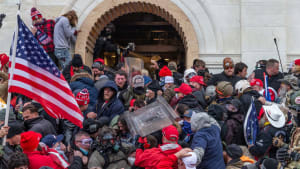 In never-before-seen footage shown during the Jan. 6 committee's public hearing on Thursday night, Proud Boys and other supporters of former President Donald Trump are shown gathering on Jan. 6, 2021, at the National Mall, with a woman telling the videographer, "I am not allowed to say what is going on today, everyone is going to have to watch for themselves, but it's going to happen. Something is going to happen." The powerful footage was filmed by Nick Quested, a documentarian who was following the Proud Boys. Quested was one of the witnesses who appeared during the hearing, and told the panel, "I documented the crowd turn from protesters...
Full Article at The Week